Joe and Jill Biden are Roman Catholics - but ALL three of the Biden children married Jews. 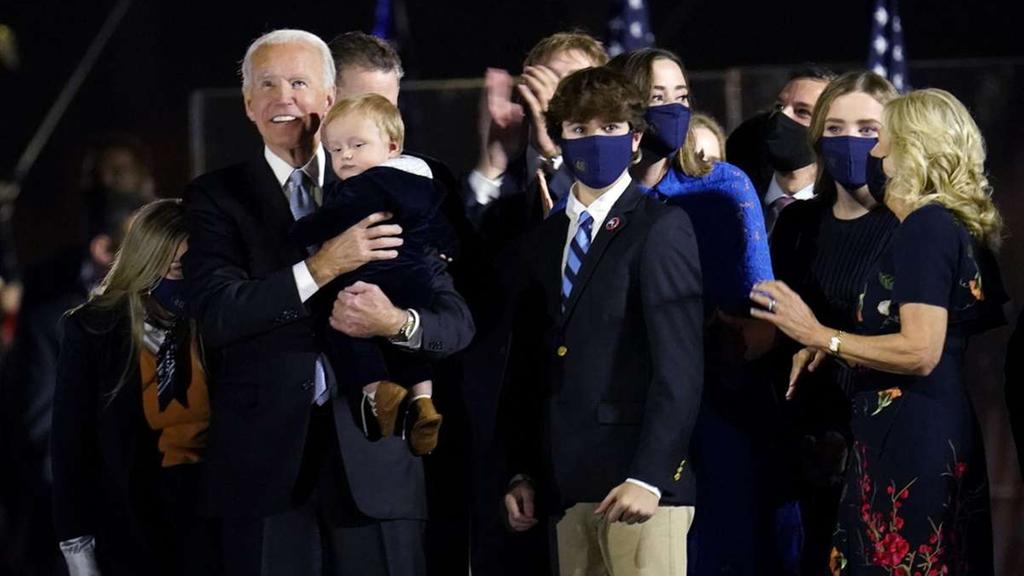 For a staunch Roman Catholic, President –Elect Joe Biden has a remarkably Jewish family.
All three of his children married Jewish spouses. And the baby grandson that he cradled in his arms after his victory speech last week is halachically Jewish, as are the children of his late son Beau.

Beau’s wife, Hallie Olivere was the Bidens’ first Jewish daughter-in law. Joe Biden had known her mother Joan since childhood, and once joked that he’d have liked to have married her. 'I was the Catholic kid. She was the Jewish girl. I still tried. I didn’t get anywhere.'
Hallie and Beau married in 2002, and had children Natalie and Robert. In 2015 Beau died of brain cancer. In the aftermath of his death, Hallie turned to his brother Hunter, who was separated from his wife, Kathleen, the mother of their children Naomi, Finnegan and Maisy.

Joe and Jill Biden, as well as Hallie’s parents, supported the couple, with Joe Biden saying that the couple had his and Jill’s “full and complete support, and we are happy for them.”
Hallie and Hunter split up last year, in part because of the constant attention from the press. Not long afterwards Hunter met Jewish South African film maker Melissa Cohen, and within 10 days the couple were married in a ceremony in her Los Angeles flat. Hunter marked the occasion by getting a tattoo to match Cohen’s - the word 'shalom' in Hebrew letters.
According to the South African Jewish Report, it was love at first sight, and her family were left reeling by the news. Her parents Zoe and Lee Cohen would not comment, but her brother Garyn said: “It’s very much a fairytale, all they want is for Melissa to be happy, and for there to be a happy ending.”

Melissa grew up with three older brothers, attended a Jewish day school and studied interior design before moving to Los Angeles. Garyn said that his sister had always been a “champion for nature conservation and the environment, as well as the underprivileged and people from all walks of life. She is truly remarkable, intelligent, and has a special neshoma [soul].”
The couple’s baby, named Beau, was born in April, just under a year after they first met and married.

Joe and Jill Biden’s daughter Ashley also has a Jewish spouse - Howard Krein, an ENT specialist at a Philadelphia hospital. They married in 2012, in a Catholic-Jewish ceremony followed by a reception during which the then Vice-President danced the hora. “I’m the only Irish Catholic you know who had his dream met because his daughter married a Jewish surgeon,” he said in 2016.

Alongside the Biden’s Jewish in-laws, the new Vice President’s husband Doug Emhoff is also Jewish. Not only is he the first American ‘Second Gentleman’, he’s also the first Jewish spouse of an American president or vice president.
Mr Emhoff, 56, met Kamala Harris in 2013. He’s a successful entertainment lawyer. They married in 2014. "In keeping with our Indian and Jewish heritages, I put a flower garland around Doug's neck and he stomped on a glass." Ms Harris wrote.